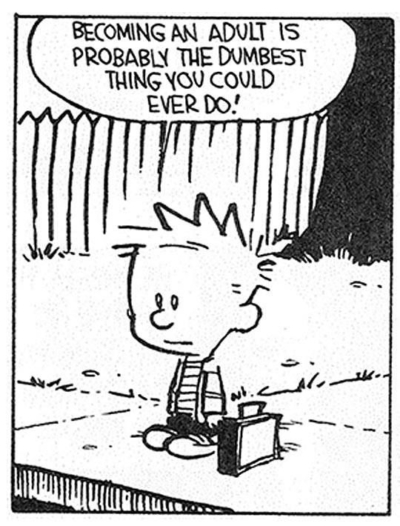 So you’re supposedly an “adult.” At least that’s what the age on your driver’s license says. Maybe you’ve technically been an adult for a looooong time. Seems like based on that number that you should feel all grown up by now.

You have an image in your mind of what a “grown up” is. What they do, what their lives look like. And you see all the ways you don’t measure up.

You feel pressured to meet certain expectations. To play the adult role. To do the adult things. Sometimes the pressure is so strong that you freeze up, procrastinate, unable to get any traction. And then you think of yourself as a failure, unable to be the adult you think you’re supposed to be.

Or you’re doing all the adult things. You’re a success! But somewhere inside, you feel trapped and burdened by the limitations of the roles you’ve taken on. And you desperately want to break free.

Or maybe you’re like me and the idea of being an adult gives you a stink-face.

You spent years watching the so-called grown ups around you, thinking “I don’t ever want to be like that.” Seeing adults that are unhappy and stressed, yelling or emotionally shut down. Blaming everyone else for their problems. Talking negatively about themselves. Thinking they know everything about everything. Making some really bad choices. And then having the nerve to tell us to…

So many of us heard those words coming from adults with the emotional maturity of a raisin. Have a lofty dream? GROW UP. Crying or expressing a feeling? GROW UP. Struggling to figure out how to pay your bills and be happy at the same time? Suck it up and GROW UP.

And now, here you are. At a point in your life where society agrees – you’re a grown up. An adult. They’re expecting you to do the adult things – get a job, get a mortgage, get married and settle down. Maybe you’ve done those things. Maybe you’ve done those things for years. And yet, something in you feels like a fraud and wonders, is this what being an adult really is?

So then, what is a real adult?

Well, a real adult probably wouldn’t walk around bragging about being a “real adult” because they wouldn’t be overly identified with being an adult in the first place. They would more likely think of themselves as a fellow human who just happens to have a few extra years of experience. They would recognize their innate connection to others and the timeless dimension of their being as at least as valid as conceiving of themselves as an adult who knows things.

While a real adult might recognize their own maturity and wisdom, they won’t lord it over you. They recognize that everyone has their path, and that learning and growing and making mistakes is an essential part of growing as a person. And they know that because they’ve been there. And ARE there. They know there’s no end goal, no finish line.

A real adult is responsible in the truest sense of the word. Response – able. Able to respond in a way that is appropriate to the needs of the moment, not based on ideas about the past or future, shoulds or shouldn’ts.

A real adult has emotional maturity. A real adult is aware of their emotional state (is aware of having ALL the feelings, comfortable and uncomfortable), is able to communicate their feelings in a responsible way (no shame or blame here, folks), and takes responsibility for looking into their stories that are perpetuating chronic negative emotions. They are not closed off to certain emotions, nor are they lashing them out onto others. In fact, a real adult is so OPEN to their emotions that they have developed an ease and comfort in being with and allowing them.

A real adult is OPEN to ideas and perspectives that are different from their own. This doesn’t mean that they’ll agree, but that they acknowledge that not everyone sees the world their way. And that their way isn’t necessarily the “right” way. Or the only way. They don’t think they know it all. In fact, they are more open than most to considering multiple perspectives and recognizing the limits of their knowledge, while also holding true to the values that are important for them.

A real adult doesn’t focus on growing up in the traditional sense. While they might be good at the adulting things and even set goals (or not), they know that the most important growing up we can do is to…

And to be honest, when we GROW OPEN it makes doing the “grown up” things a heck of a lot easier, more enjoyable, and more fulfilling.

Let go of growing up. I’m not a fan. This concept comes with so many ideas of what we think we should be, all based upon what other people have told us and the pressures we’ve put on ourselves. It’s basically impossible to think of growing up without trapping ourselves into some sort of limited box. And does the world really need more “grown ups”? We’ve got plenty! A real, open adult is much more of a rarity, and much more needed.

So stop focusing on growing up, and GROW OPEN.

What can you do to GROW OPEN? Tune into my next blog post!