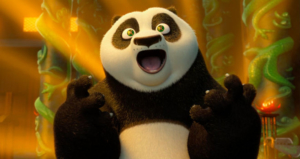 “There is no secret ingredient.” – Po

One of the most insightful, most profound, and downright funniest movies I have seen in the last decade is Kung Fu Panda. You might know it as the Dreamworks animated feature starring Jack Black as an ordinary panda who becomes a Kung Fu master. If you haven’t seen it, I suggest you bump it to the top of your Netflix queue because not only is it hilarious, it’s incredibly wise.

I’m going to summarize part of the plot in order to talk about its significance. For those of you that haven’t seen the movie and want it to be a surprise, I suggest you return to this post after you’ve seen the movie.

Po the panda works at his father’s popular noodle shop but dreams (literally and metaphorically) of learning Kung Fu. To please his father (who is a goose, but that’s another story…), Po tells him he has been dreaming of noodles, and his father excitedly states that Po is almost ready to learn the secret ingredient of his secret ingredient soup! However, through a turn of events, Po is found to be the Dragon Warrior, a predestined Kung Fu master who is supposed to bring peace to their valley. This is a big surprise to everyone, especially Po.

The process Po goes through to become the Dragon Warrior is worthy of a post in and of itself. But I’d like to focus on the Dragon Scroll and Po’s revelation.

The Dragon Scroll is touted as containing the secret to “limitless power,” and is meant to be read by the true Dragon Warrior to give him this power. There’s a lot of buildup to the reading of this scroll, and when it is ceremoniously brought to Po it is assumed it’s going to contain instructions or great wisdom. However, when Po opens it, he discovers it’s blank.

This revelation opens Po to recognizing that the blankness of the scroll and the slight reflective, mirror-like quality is the message of the scroll. There is no secret ingredient to being the Dragon Warrior. It’s nothing. And It’s him. And Po himself, reflected in that blankness, needs nothing added. And this recognition is the secret to limitless power.

The revelation of the Dragon Scroll is that we need nothing to be acceptable in our human-ness (or panda-ness). We just are. And at the same time, the secret ingredient is “Nothing” or no-thing – awareness at its most fundamental level. This is a nondual revelation – that our deepest nature is empty, and that who we are, right now, is held in, supported by, and permeated by that emptiness with no judgment. We are unconditionally accepted and we are unconditional acceptance. This recognition is the source of limitless power.

We are all Dragon Warriors and there is no secret ingredient to make us so. The only “secret” is the recognition. Until Po realized that there was nothing he needed to add to himself, the scroll was meaningless. That same principle applies to us. Until we truly take in on our deepest level that who we are is fundamentally OK and that there is no secret ingredient that will make us better, we will always be searching outside ourselves for something to fix or improve us.

Maybe you’ve been searching for something outside yourself to make you finally feel acceptable. Or maybe you’ve been spiritually searching, hoping to find some state or experience that will finally let you know that you’ve “made it.” But what if the truth is that you’re already acceptable, and that there’s nowhere to make it to, outside of now?

If you’re like me, this may bring up all kinds of feelings – from relief and gratitude to frustration and disappointment. There’s relief in realizing we can stop looking, that we have always been what we are looking for. And there can also be disappointment in letting go of our illusions of who we thought we’d be if we were finally acceptable, if we finally “made it.”

There is no secret ingredient to us. Nothing needs to be added or learned to make us worthy. Awareness, which can be experienced as nothingness or emptiness, is not something to find or add, it’s who we are on our most fundamental level. And its simplicity is so tasty that we might think there’s an ingredient added. The secret isn’t self-improvement, spiritual experiences, status, money, fame, or knowledge, though we are all free to enjoy engaging in these pursuits. The real secret is to know who we truly are at the depths of our being in each and every moment, to experience that on our most fundamental level we are, and always have been, completely accepted, accepting, and acceptable.

For those of you who have seen the second movie, or who have experienced this revelation for yourself, you know that the initial revelation is not the end of the journey but only the beginning. A journey which is always happening right now!